I sometimes do not agree with Malala Yousafzai but I have always known that she is far too intelligent and independent to be a marionette – or anyone’s marionette for that matter.

Malala is the face of British Vogue’s July 2021 issue and wow, does she look beautiful! In an attire that is normally associated with the subjugation of the female willpower in Western media, Malala is glowing with a keen sense of azaadi (freedom) and comfort. She addressed the stigma of wearing Pakistani clothes – especially the head covering (dupatta/scarf) – and said, “It’s a cultural symbol for us Pashtuns, so it represents where I come from. And Muslim girls or Pashtun girls or Pakistani girls, when we follow our traditional dress, we’re considered to be oppressed, or voiceless, or living under patriarchy. I want to tell everyone that you can have your own voice within your culture, and you can have equality in your culture.”

This is a powerful statement to make on many measures. The first aspect is Malala’s ethnic heritage. She is a Pathan woman who comes from Swat Valley that is famously called the ‘Switzerland of the East’. Pashtuns are an upstanding ethnicity and are often reduced to common imageries of Kalashnikovs, backwardness and extremism within Pakistan, party due to Khyber-Pakhtunkhwa (where the majority of Pakistani Pashtoons reside) having been the focal point of the War on Terror and also due to ethnic bigotry in a vibrantly diverse country. Malala’s face on Vogue has reminded us all about how unabashedly cool it is to be a Pashtun woman, both inside and outside Pakistan.

The second aspect is her nationality. Pakistani women are seen as some of the most disenfranchised women in the world, and for good reason (not denying it). Various characteristics of their lifestyle – their dressing in particular – are seen as symbols of gender-based restriction and thus, looked down upon. Malala has worn indigenous Pakistani ethnic and cultural garments around the world and has carried herself with grace, dignity and pride. By doing so, she has shattered myths across the globe and within Pakistan itself about how disowning or shying away from one’s Eastern traditions is not the correct way to make one’s mark in the Western world. Malala is respected everywhere she goes for who she is: a Pakistani woman through and through. For a postcolonial nation that still associates the Western language, lifestyle and wardrobe with sophistication, progress and authority, here is a young Pakistani woman effortlessly embodying exactly that by wearing her national pride on her sleeve – literally. As fellow Pakistanis, we should be proud of her although this does not in any way mean that she is bound to dress a certain way – or the ‘Pakistani’ way to be specific. As with evolution, one tends to change the way one dresses with time and if there ever comes a day when she stops covering her hair or starts dressing differently, she should not be held responsible for that as it is her personal choice – and not her duty – to wear Pakistani clothes.

Lastly and not so imaginatively, the ‘Muslim’ label. We are all tired of it. The justifications, the personal alterations, the references to historical legacies from a bygone past and the cultural self-glorifications in the face of bombastic questions and attitudes. The moment many Muslim women start socialising or studying/working in a Western country, they adapt themselves more than they may want to just to seem empowered even if by doing so they disempower themselves internally. A tingling, subconscious sense of apology for 9/11 and the War on Terror is always present in the back of many of their minds because others around them do not let them forget – not that they had anything to do with it in the first place. And so sometimes, some women end up losing the head covering and/or switching to Western clothing just for the sake and the show of it: that they too are normal women. Malala has once again redefined what it means to be normal and what it means to be confident as a Muslim woman through her fashion and might I dare say, through her natural, unaltered and unadulterated self. It is nothing less than a fashion statement for a young Pashtun, Pakistani, Muslim woman wearing traditional clothing to be deemed glamorous, individualistic and liberated in her own right on the cover of Vogue Magazine. Malala may be the first from her background to have done that and it is commendable.

Now, let’s come to the subject of my academic interest: radicalisation. Recently, I was asked to define radicalisation in a PhD interview. I acknowledged that it is very much a contested term with various definitions being held and debated in academia. However, the simplest manner for me, as an aspiring (counter) radicalisation expert, to explain the concept is by identifying that a radical and self-righteous person tends to think that their religious beliefs are not only superior to those of others around them but they also depict a tangible sense of not being able to coexist with other ideologies (be it their own family or loved ones). One common trait is gently or forcefully trying to morally police others and change their beliefs, often through manipulative techniques such as guilt (ruining the family name or causing pain to others for simply not agreeing with their version of religion), fear (of the afterlife that radical people often tend to have great personal stakes and rights over) or a false sense of piety (“shareef, khandani” larkiyan would know). Interestingly, I am also often asked why I chose this niche line of study and I always say, “because I can see what is happening around me”.

I am sure Malala can see it too. Alas, she is a target of the said phenomena today.

What Malala should know is that by speaking about the idea of having a partner in her life, as opposed to getting married the traditional way, not only has she rightly offended blind conformists and reactionaries but also ignited a sense of sisterhood and brotherhood with all those Pakistanis who might have thought the same – even if for a moment – at some point in their lives. And those kinds of people do exist. In large numbers.

Questioning the tradition and institution of marriage or having the personal option (right) to not get married is not a foreign conspiracy designed to infiltrate and subvert Pakistan’s culture. Instead, our culture is infiltrated by the inability to wonder by keeping such debates and conversations off the table. By merely uttering the idea and provoking a digital discourse, Malala has enriched our cultural capacity to think. This has simultaneously made us self-reflect and question if we even possess it anymore. The character assassination that Malala has been at the receiving end of – despite having had upheld most of her cultural traditions – seems to indicate the latter. This proves, once again, that respect in our society is solely reserved for women who obey and who cannot imagine beyond what they are indoctrinated with from the time that they are born. We are all conditioned in that sense but with exposure and education – the hallmark of Malala’s identity and activism, ironically – one tends to sometimes make decisions that are non-conformist and subversive in an ingenuous manner. That is not necessarily immoral – keeping in mind that not every unIslamic aspect is equivocal to immorality. Those who believe that they cannot entertain the idea or ever let it happen within our community or country are, frankly speaking, either culturally or religiously radicalised.

Amongst those lecturing Malala on the tenets of Islam are famous people who have had reputations for being indulgently decadent in the past. Whilst some have found it ironic that they have taken the stand for the practice of marriage being untouchable, I see it as their way out after having lived lives where they were publicly shunned and disrespected to such extremes that they needed to turn to religion to feel human again. Such religious journeys are not free from the potential for radicalisation, with people jumping from one end of the extreme to the other and viewing a drastic religious transformation as the only path to being and feeling respected within society; the ultimate face-saving.

The main message for our rather triggered awaam is that Malala is an adult and a human being. The former secures her right to choose what she thinks is best for her (she never asked any of us for religious sermons!) and the second anchors her birth-right to be accepted and respected regardless of whether she prefers marriage or unmarried partnership for herself. It is her life and she can do whatever she wants. It is not her burden, nor anyone else’s, to praise marriage to please conservative crowds on social media, which has problematically become an echo chamber on its own.

Having acquired mass global fame and admiration at a young age when she was often seen at her father’s side, this is an older, evolved and self-standing version of her. This is the free-spirited and unregimented Malala Yousafzai. She can think for herself and us Pakistanis better be ready for her and her ruminations because unlike the Malala that many would fancy, this one is free. 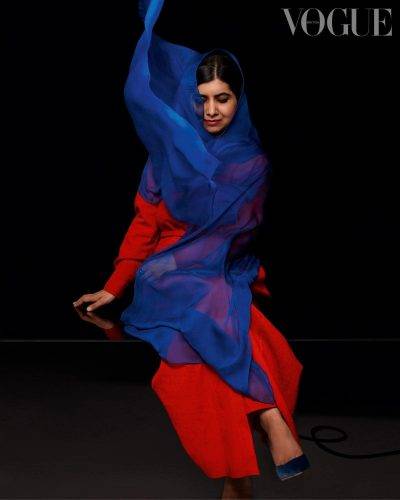 Bio: The writer completed her Bachelor’s in Political Science and Mass Communication and her Master’s in International Security from the Forman Christian College – Lahore (freshman year at the University of Houston) and the University of Warwick, respectively. She recently finished her Erasmus+ Recent Graduate Traineeship at the Peace Research Institute Frankfurt and is currently based in Germany. Her work has been published in Pakistan, the United States of America, the United Kingdom and Germany in publications including the Peace Research Institute Frankfurt (PRIF) Blog, the Global Network on Extremism and Technology (GNET), Global Voices, the Warwick Globalist, Warwick Perspectives, Kamena Magazine, Cobalt Magazine, the University of Houston’s newspaper and Behenchara Magazine.