So, I recently started dating this guy. We aren’t officially in a relationship though.

Even in these two months, we only met twice and most of the time was spent over the phone where I realized that mainly, we have a lot of ideological differences and we both are sort of people who can’t help discussing things but sometimes they get out of hand.

He is a very humorous person and sometimes it gets so tricky to understand if he really does mean some of the politically incorrect things he says or is he just kidding? I don’t wanna nag him too much but at the same time I feel like I need to clear up things all the time and they often end up in not very nice arguments with me feeling guilty for jumping on him, waiting for him to make a slip.

Being a feminist, it’s really hard to deal with all this especially because all the relationship advices out there are so whitewashed.

What about relationships where you are just getting to know each other and live in different cities?

After reading so much feminist theory, I feel like I want him to have the progressive values of a true feminist ally but at the same time I realize that you can never force someone to be who they aren’t.

How do I handle all this? He isn’t an overtly sexist person but he isn’t a feminist’s wet dream either.

Also, thank you so much for this platform.

So this is how I see it, you are the one who gets to decide how serious you want this to get. The fact that you are writing in, clearly implies there’s an empath in you that’s itching to guide the ignorant ones towards the light but here’s the thing. Do you think you can be in a socially romantic situation with this person? Right now, conversations and even meetings, exist in an unusual vacuum, and that won’t be the case once things go back to whatever normal we manage to reach. I am a strong believer in social compatibility for anything to have any sort of positive existence for either party and that’s only possible if both sides share some common ground and are willing to meet halfway in the other’s world for any happy medium.

Also you do know that this isn’t about a different dialect of conversation? Going forward, you two might end up speaking different languages and well the key to any relationship….what’s that C word…

I do know that you must be a positive influence in his life, I’m just skeptical as to the romantic nature of it. Call me old fashioned, but do you see this going anywhere and if there’s an iota of yes in there somewhere, then step away, romantically and emotionally, for now. Beware, the boy has not met many like you. He doesn’t know how this world works, the semantics, the grammar, the nuances and even the words!!

Why not get his feet wet first by just keeping it real and friendly? He’s always there, new and improved, if you feel that there’s promise, if not, some other feminist sister will thank you for the introduction and education into something that’s no longer a cliché.

I do know, from unfortunate experience, that once you start down the rabbit hole that’s the love canal, ah well then things are murky and murkier, and previously observed quirks can quickly start to stink but you are stuck.

Having said that, are you looking for a project? If yes then why not? I’d just err on the side of caution and say keep your emotions in check. And why not explore his relationship with the women in his life, if it gets to that. For the most part, past behaviour, unfortunately remains the best predictor for future behaviour, unless massive and conscious intervention takes place under extremely sublime circumstances.

You seem to me a very pragmatic and fairly rational person, so I would say just remain aware at all points. If you do decide to go forward with this, this might end up being a tightrope walk between utter skepticism on your part and sheer acceptance of ideological differences, that let’s face it, do matter to you.

Best of luck my fierce warrior. We need more like you so we can open a reform school! An education is what’s needed.

Lemme know how it plays out…

How cute is he though? 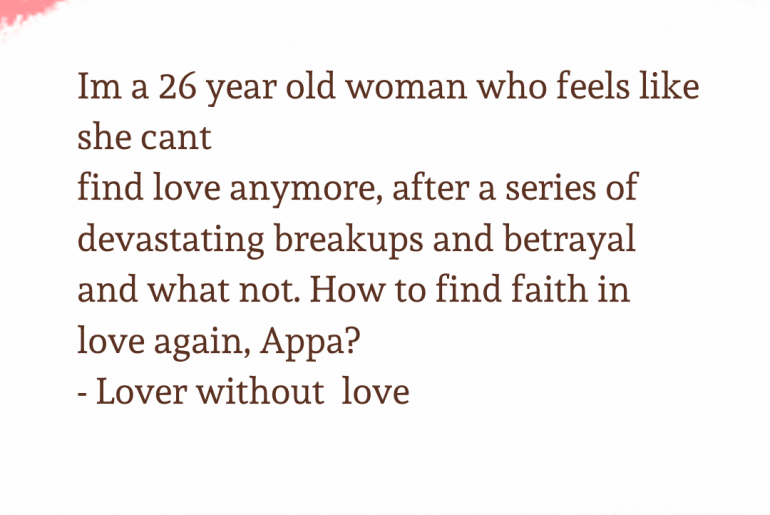