For the longest of time, I’ve tried figuring out how anything I do will ever be enough to reciprocate half of what you’ve done for me, or the person you have been.  Perhaps I never can. Maybe down the road I might even let you down because who knows. But penning it down might help me remind myself of what is owed and that although life can be majorly unfair, we must keep going for those who have invested time, emotions and care in us. Maybe when I am close to giving up or count all those things that make life unbearable, I’d count you and this letter twice and it would somehow make it all better. For all I know, you do not deserve to be disappointed. You do not deserve to have someone give up on everything they could have possibly been after all that you did for them. And I for one, would hate to be the prime example of such. And luckily that keeps me afloat. I often ask myself why people look for love or connection. Because it is the one thing known to do more damage to most and still sought after. But that makes me the luckiest person ever, because you taught me to look for it within myself before I go hunting aimlessly elsewhere. You know because people like me, who are somehow damaged as a product of a broken/dysfunctional family, mostly need assurance and affection or someone to remind them of the good that can always be counted on in a world so dark otherwise. But because of everything we have been through, we are so much stronger. You taught me how people are needed not to complete us, but to add value to the whole we already are. But what makes us incomplete is our own potential untapped because of deep seated insecurities that more often than not mean nothing. I wear confidence on my sleeve today, which even for me is often surprising because only a few years ago I was an alien who spoke the language of awkwardness and silence. But you helped me see through the “me” I didn’t know was ever there. The people I met, the experiences I had, walked me right into the arms of the person I needed most: Myself. I think damaged people have it hard because it is not easy to see light even amidst light itself. So much so chaos befriends us better and even trying to look for hope is too much to ask for.

People like me, we seldom look for love, I realized. It is what we yearn to give, because there is much build up. Instead, we look for people to believe in us, when our own people won’t. We long for friends who’d never give up on us, even when everything we do screams “irresponsible” and “careless”. And sadly, most of us don’t have these people in our lives because of the emotional trauma we clad inadvertently. But then there’s you. Sometimes we become the worst version of ourselves owing to things we can’t always control. In such times, what hurts most is explaining ourselves and fighting for people to see us as who we truly are. Hoping they would see through the scars of circumstantial folly and love us for the good we inherently have as opposed to the bad that is only there as a coping mechanism or what so ever. I, however, found someone I did not have to translate my spirit and soul to.  I gave you several opportunities to walk out on me and strike me off as a victim of self pity and exaggerated gloom. I outran ways to make my own case harder to fight. Had you been a boy, one would say you have needs. Needs make one stay if nothing else would, eh? But you are just a person; a person looking to heal people but not as projects. Giving and wanting little to nothing in return. You saw a spark in me and supported me in every possible way. I was led to books and places and people and ideas that were the highlights in the making of me. You, in a world full of self-serving, cold and ruthless people, are a miracle.

I always mess up as far as relationships are concerned. And every time I do I tell myself, God sent you and you are priceless. How many people have a friend who genuinely has their best interests and would go out on a limb for them, even when their very existing is the epitome of “doubtful”. I feel sorry for the reader but not so for myself because I have you. A friend who encompasses several roles, not having a doting man doesn’t feel so bad after all. (Although I sincerely hope I find one soon enough)

I guess I can sum it up by quoting an article that I once shared on Facebook and you did not react to. So it goes by saying there are 5 different kinds of mentors one must always be surrounded by to stay sane in a world like ours today. Now the author thinks most people have 2 to 3 mentors in one person but they always need more people to encompass all roles. But little does he know, in world seemingly huge but otherwise little, there’s you; a woman who encompasses all five. “The master of craft”, you are best at what you do and have always pushed me in the right direction. “The champion of your cause” While many may object, I can safely say you support me far more than my own mother does and believe in me even on days I don’t. “You are gold but act like Copper”, you said.  “The copilot”, you are pretty much the center of my social network and more than half the people I know, I know because of you. “The anchor”, precisely put, you are the airbag to my car crash. Lastly, “The reverse mentor”, with everything you know and everything you are, you have succeeded in failing to become a narcissist, but are always willing to learn a thing or two from those around you, irrespective of their age, experience or pool of knowledge, and that includes me.

It took me forever to write this, because it has been edited several times, and yet I feel not enough has been expressed. I love you with all my heart for loving me with all yours in ways the world has forgotten to. And may I never forget your emotional investment in me, and keep striving for the person you hope to see me become, because more than failure itself, I fear letting you down despite knowing even then you wouldn’t strike me off. I am forever indebted to God, because I have a (sister/friend/somewhatofamother:or not/grandma/yoda) all in one, that not many can say for themselves.

P.s I think one letter didn’t half do it; I need to pen several more. 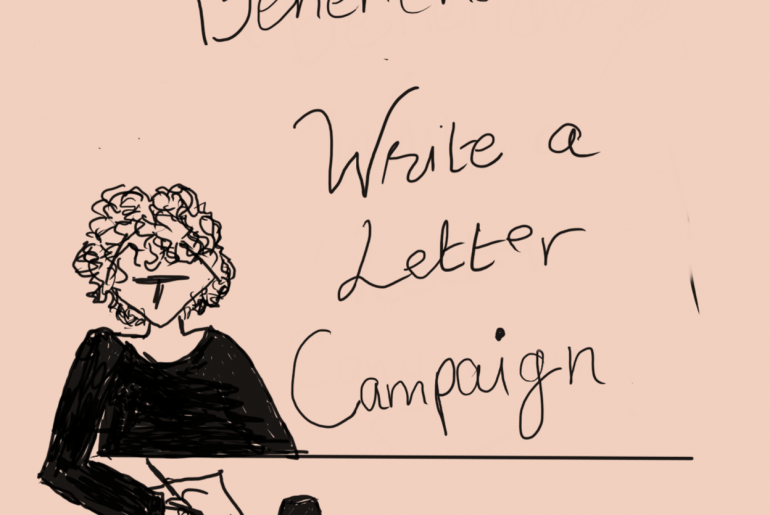